Istanbul's new TV & radio tower is a project of superlatives. Currently being one of the most prestigious architectural projects in Turkey, if not the world, it was inaugurated on May 29, 2021. A look behind the scenes reveals interesting details and the inner workings of the ultimate lighting system of this mega structure. 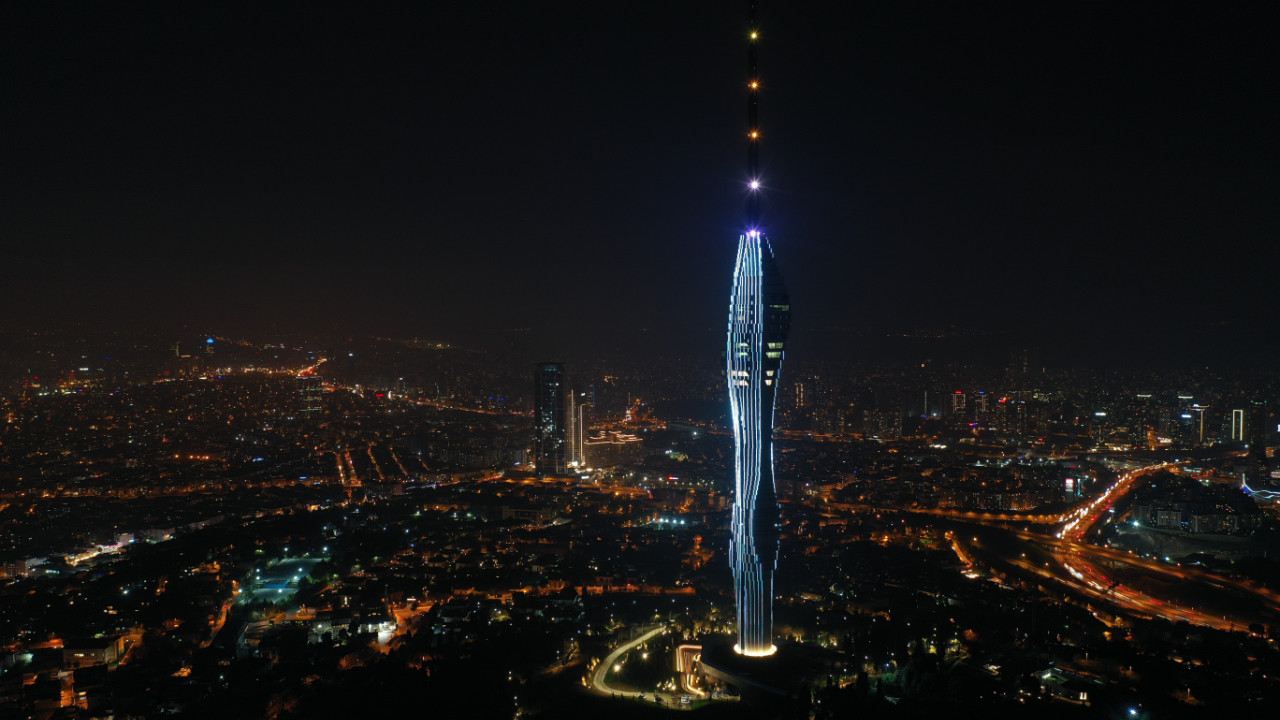 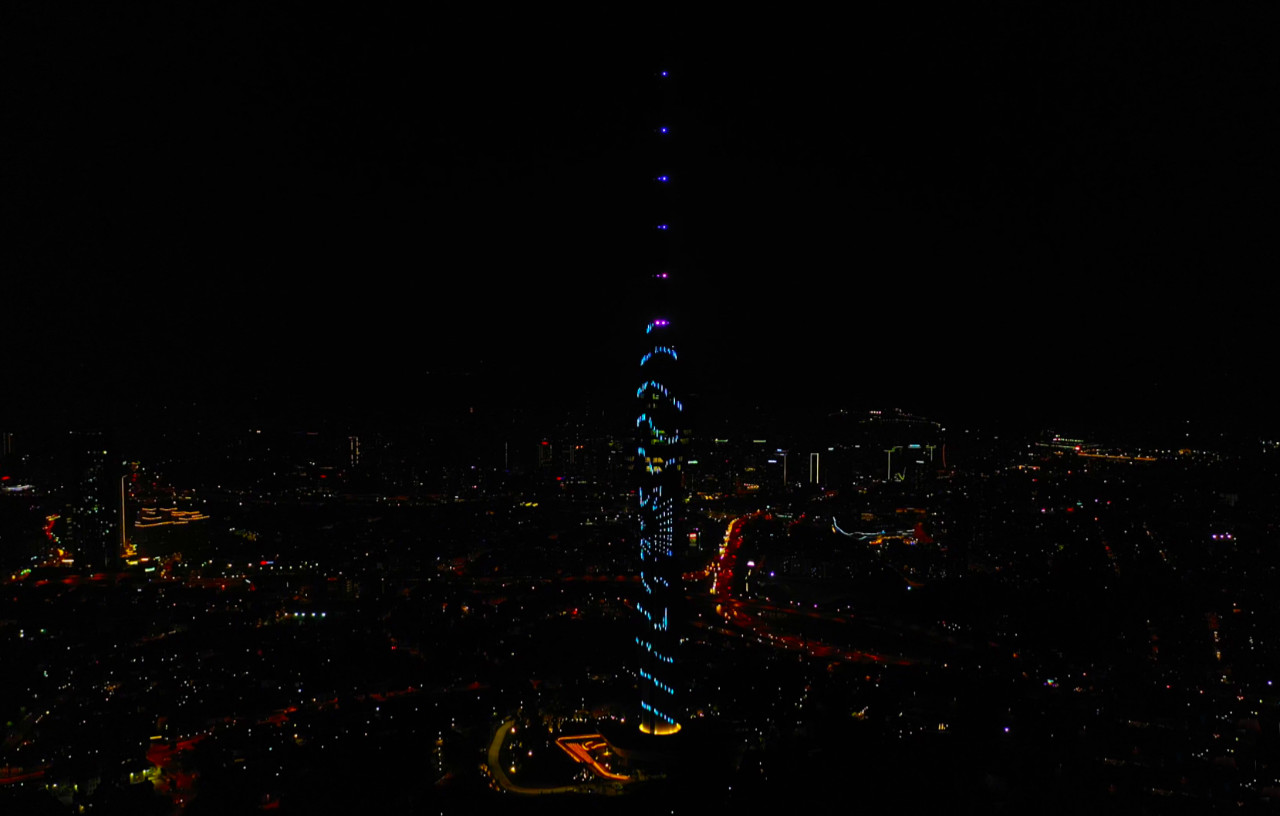 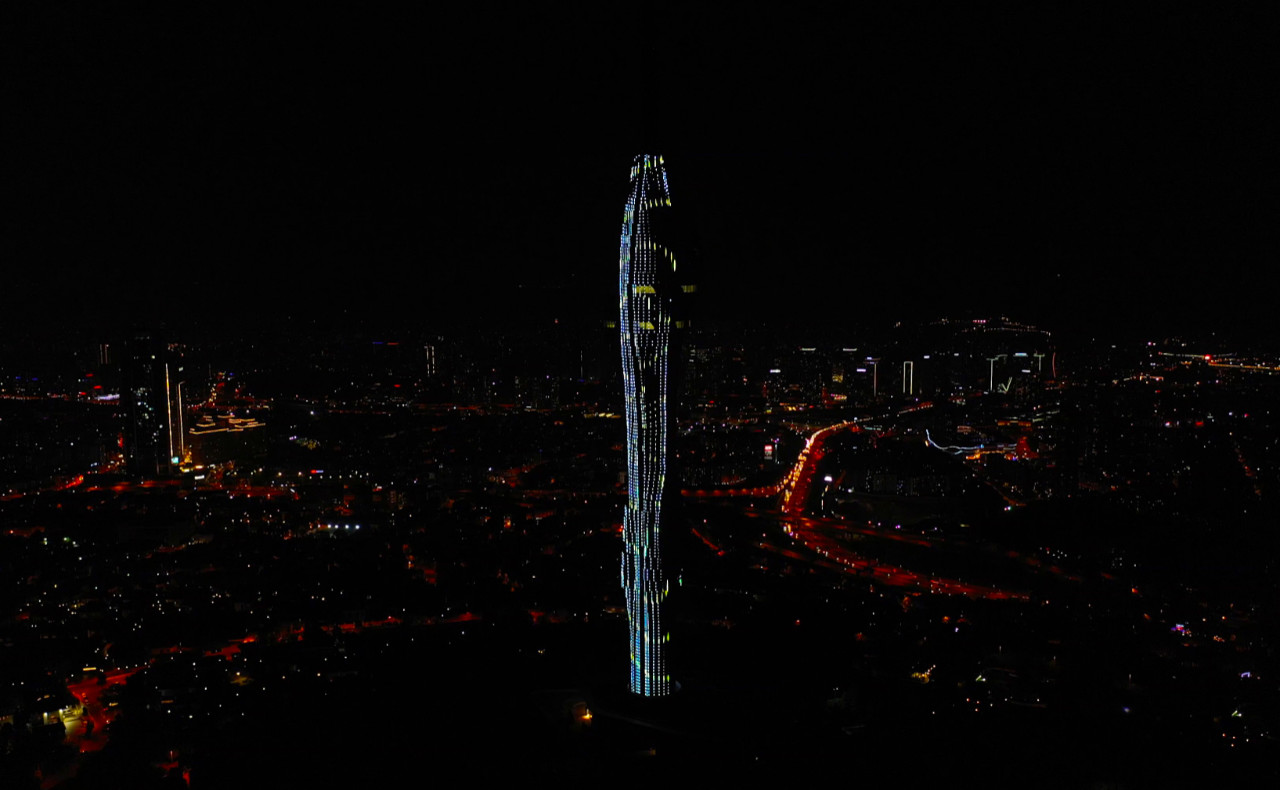 The monolith rises staggering 369 meters high. Located on Küçük Çamlıca, small Çamlıca hill, it still towers 584 meters above sea level, making it the tallest building in Istanbul and the highest tower in Europe.

Famous architect Melike Altınışık spearheaded the multi-year project. It is not only a highlight of modern architecture, but also serves a very specific purpose. Before, 33 TV and radio antennas were situated on the ground of the hill. Now, their majority is concentrated into the single 145 meters steel antenna atop the new concrete structure. This reduces the electro-magnetic pollution by a factor of 15. At the same time, 100 channels can be broadcast simultaneously: world record.

During the tender, HERA LED successfully made it to the last three companies competing to create the lighting system. They had been closely following the construction from the beginning. Their commitment paid off, since they could convince the ministries and contractors with the help of the technical features of their system. The competition specified products with 24 V that on top used proprietary protocols.

HERA LED knew that this was not feasible due to the structure of the building. Instead, HERA's fixtures work with 48 V and the DMX512 communication standard. Usage of 48 V as well as their own software conversion to 16-bit data allowed them to use much longer cables for power and data, and they finally won the contract thanks to these superior product attributes.

First specified as adjustable white fixtures, the lighting system was later revised by the Ministry to feature RGBW color mixing. HERA LED opted for 36 units of their 'Procolor® AC SC Flood Light Beam Spot' to surround the large antenna on top at several different levels to literally crown the design, as the tower is said to recreate a women's silhouette. But that is only a tiny part. Istanbul is one of the largest cities in the world, attracting a steady flow of tourists. Being the new landmark, the lighting design needed to reflect the pounding, urban rhythm of the metropolis that never sleeps.

No less than 6,200 meters of linear IP67 lighting fixtures make up a media display that covers the entire facade of the building. The 'Sword® 100x3 RGBW 150 cm Radius Diffused' were custom-designed for this project. They feature 1 individual pixel including 3 mid-power LEDs every 10 cm as light dots to ensure visibility over a wide area. The result is a spectacular media facade that uses individual LED pixels to create an immense surface area for dynamic lighting effects.

MADRIX® 5 control software was once again chosen for its "user friendliness and its endless possibilities for dynamic animations". The software generates parametric content in real time and individually maps it to any gridded fixture arrangement with the help of pixel mapping. "We needed that kind of technology to emphasize the architectural features and make it even more exciting", says HERA's Project Sales Director Serkan Demirel.

The MADRIX® 5 Software provides well-defined, pixel-perfect, fluid, and video-like visuals that do not have to be inconveniently pre-rendered as video files and make changes possible within seconds. Communication is based on DMX, a technology that has been established in the entertainment-lighting industries for a long time. Due to the high number of 248,000 controlled DMX channels, a 'MADRIX® 5 ultimate' software license is in use. And with that, the tower lights up spectacularly at night.

Such an elaborate lighting system requires not only great content, but reliable performance for signal distribution as well. 314 MADRIX® STELLA controllers receive the Art-Net control data over Ethernet network and distribute it to the fixtures over DMX cabling. This approach is common and widely established. Still, it means that this is the highest number of MADRIX® STELLA units in only one installation to date.

Just as a single software is used for control, a single application is used for monitoring. Due to the high visibility of the large tower across Istanbul, its importance to become the new symbol of the city, and the realization that otherwise it would not be possible to easily locate malfunctioning fixtures, monitoring was explicitly required in the project's tender.

Enter MADRIX® RADAR. On the one hand, each lighting fixture is equipped with several sensors. This means that valuable data about the state of operation can be sent out by them in regular intervals. On the other hand, MADRIX® RADAR acts as the read-out by presenting all these different data points in a cohesive overview. The software can automatically initiate data and sensor requests in time intervals ranging from 60 seconds to 24 hours. In addition to mere numbers and values, graphs and graphical overviews provide quick visual assistance.

In-between, MADRIX® STELLA sends these RDM requests and replies back and forth between software and fixtures. It does so at the same time as it forwards the Art-Net data at its high frame rate for smooth live control from MADRIX® 5. The STELLA controllers process control data and monitoring data simultaneously and during live operation in a way that does not result in interferences. In this way, the unit's system is designed to prevent visual flickering or other signal interruptions. Continuous monitoring, let alone for thousands of fixtures or even in real time, was simply not possible with RDM before MADRIX® RADAR.

"Thanks to the high-speed communication of MADRIX® RADAR and MADRIX® hardware products, we can remotely monitor different voltages (Input Voltage, MCU Voltage), temperatures (PCB, Regulator), lumen-maintenance life, power cycles, and the status of each fixture every single day. In case of irregularities or problems, the software automatically sends us status reports by e-mail," explains Demirel.

By using MADRIX® RDM nodes, the MADRIX® RADAR software license is already priced into the product. The combination of MADRIX® software and hardware thus offers a competitive advantage no other system provides. "Visual inspection of the lighting system is impossible for large-scale projects", he continues. By employing this monitoring process, HERA's engineers can readily watch critical technical parameters, observe weak points, and even anticipate product failures based on the long-term data history; another unique feature.

The level of insights into the system is unprecedented. That is why HERA LED calls it nothing less than a "revolution in lighting". "From now on, we are designing all projects with MADRIX® RADAR, because it is the world's best lighting monitoring system. This is the technology of today and the future."

HERA LED has over 15 years of experience in manufacturing and projects. The company was founded in 2004 in the field of architectural and entertainment lighting.

HERA's highly qualified team of engineers, architects, and technicians aims to provide safe and sustainable lighting for your project according to the highest standards and wants to make your lighting design stand out. Its proficient R&D team conducts research, design, and production in the company's own production facilities.

Thanks to this vertical integration, HERA LED has successfully carried out over 300 prestigious projects until today and has become a leading manufacturer in Turkey as well as internationally.

MADRIX® is all about powerful yet simple products for creative LED lighting. This includes compelling tools for lighting management, monitoring, and control.

MADRIX® products are proudly designed, engineered, and made in Germany. We are located in the beautiful city of Dresden. We are creating high-quality products for you that are easy to use and reliable. Innovative features and an unrivalled integration of software and hardware bring you the best results.