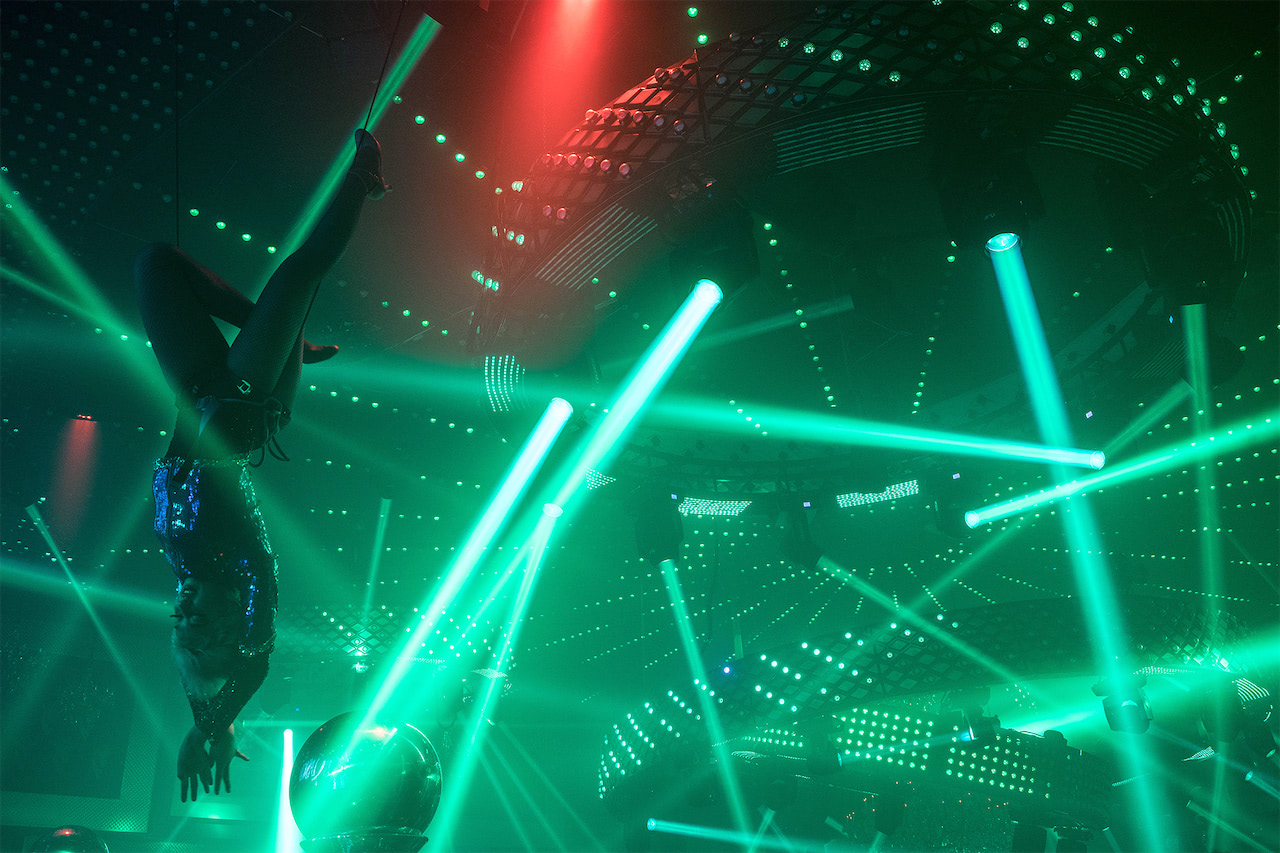 We decided work with this company from Mexico because they offered us an excellent support and reliability. We used the following equipment: 16x TA-12X1A for the main sound, 4T-12UPA-A for complementary areas and 14x TAS-2X18A-powered subwoofers.

Classico — With 10 years of experience of being one of the most successful nightclub franchises in Mexico and with impressive clubs in the most important cities of the country, they decided in March 2015 to start their most important project in Mazatlan, Sinaloa. The goal was plainly to the create the city's largest nightclub.

The result of the latest remodelling phase culminates in an impressive nightclub: More than 20,000 RGB LED pixels, 128x 7R beam moving heads, 6x kinetic, circular structures, and another rotating central, circular structure, in addition to a huge and beautiful chandelier that weighs more than a half ton, which can be lowered and rotated as well.

To control the immense quantity of RGB pixels, the MADRIX control system was chosen in collaboration with Roberto Malvaez Vidal, former director of Sin Limites, and includes 1x MADRIX LUNA 16, 4x MADRIX LUNA 8, 9x MADRIX NEBULA, 1x MADRIX KEY ultimate. For the control of moving heads and other DMX systems, a grandMA2 lighting console has been set up.

All of the 6 rings with 5 meters in diameter have RGB pixels on their outside and on the bottom, generating impactful lighting every night. In the center of the club, the main circular structure rotates 360 degrees and also rises and descends with its RGB pixels on the outside and bottom giving a special touch to the lighting effects, all if which is controlled through MADRIX NEBULA and a WiFi network.

To support the 6 kinetic structures and the central chandelier elevation system, 24x electric chain engines are used, in addition to the elevation systems for the skydancers.

All of the above runs in conjunction with 128x 50x50 LED screen modules that are also controlled by MADRIX via DVI as well as 6x 4W RGB lasers controlled with a Pangolin system. As an extra visual effect, we designed custom-made video crowns.

The decoration is a very important aspect in this place as it plays a very important role in combination with the lighting effects. The head of design, Benjamin Garcia, was responsible for this concept based on various representative elements of the region combined with a classic type of decoration and furniture. This includes the DJ booth and bar with onix covers that are illuminated by RGB lights.

Time was without question the biggest challenge for this project. Because of the holiday season, the club could not close and all renovations of the lighting system and decorations had to be completed within only a few weeks, while keeping everything operational. 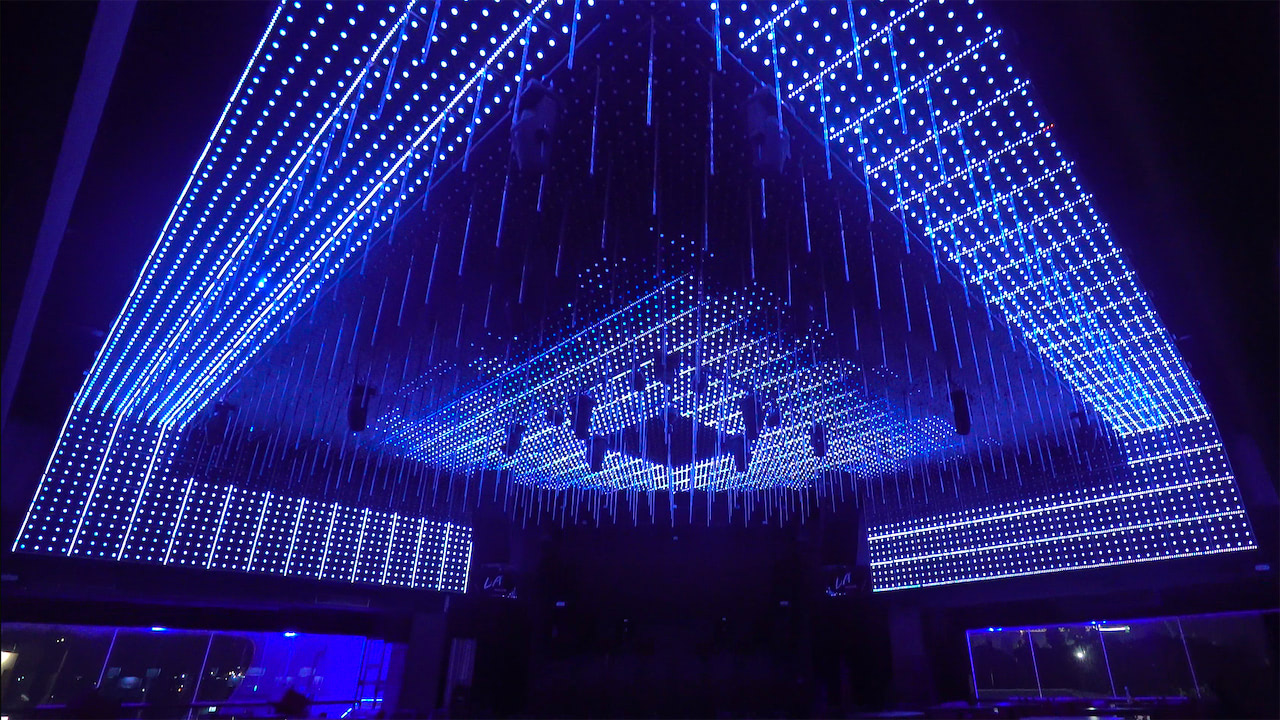 Corner Club was voted best nightclub of the MONDO-DR Awards 2018.

Audio speakers by Stage Accompany were chosen and installed for this nightclub.

Manado has become an extremely popular city in Indonesia thanks to its paradisiacal location and surrounding diving spots. Tourists and locals alike are avid party-goers and that is why Corner Club's owner wanted to create nothing less than the city's most interesting nightlife spot.

The spacious venue is not only literally located in the corner of a crowded city area, but also boasts a very high ceiling in diamond shape — ideal conditions for a unique appearance, but the previous lighting had become outdated. The new goal was to create the ideal ambience for people to enjoy the music. We from Lights Professional and NewVision Technology were hence tasked to renovate the nightclub with looks that are much more luxurious and modern.

Our recommendation was to update the system with the latest in LED lighting and control technology. The design is based on the original diamond shape of the ceiling. In order to highlight this unique characteristic and to turn it into a huge 3D lighting object, three types of LED fixtures were deployed: 1. Around 9000x 30 mm LED pixel lights with a milky cover, 2. Around 420x 1 m vertical LED tubes, and 3. around 756 m of soft LED stripes. All of these fixtures, and over 160 DMX universes in total, are controlled with a complete lighting control system that includes 20x MADRIX NEBULA hardware units and 1x MADRIX KEY ultimate software controller.

3D visual effects are the main focus of this setup. In order to present eye-catching LED lighting with tremendous wow-factors, the selected fixtures were distinctly arranged on different levels of the ceiling. They were also patched on different layers in the MADRIX Software. The final result is exceptionally gorgeous lighting that creates stunning visuals that are as volumetric, colorful, and dynamic as initially intended.

Additional lighting elements include a range of laser lights controlled by Pangolin software, moving lights installed throughout the venue, as well as large video screens behind the DJ booth in the corner and alongside the dance floor.

No less than a couple of thousand meters of wiring were needed in this project. The complexity and balance of cable exposure versus tidiness was one of the biggest challenges, which eventually took longer than expected to overcome. Preparing more than nine thousand pieces of LED pixels into hundreds of wooden panels and the corresponding configurations on four types of panels was equally challenging.

Thank you, Corner Club Manado, for giving us the chance to make this happen. 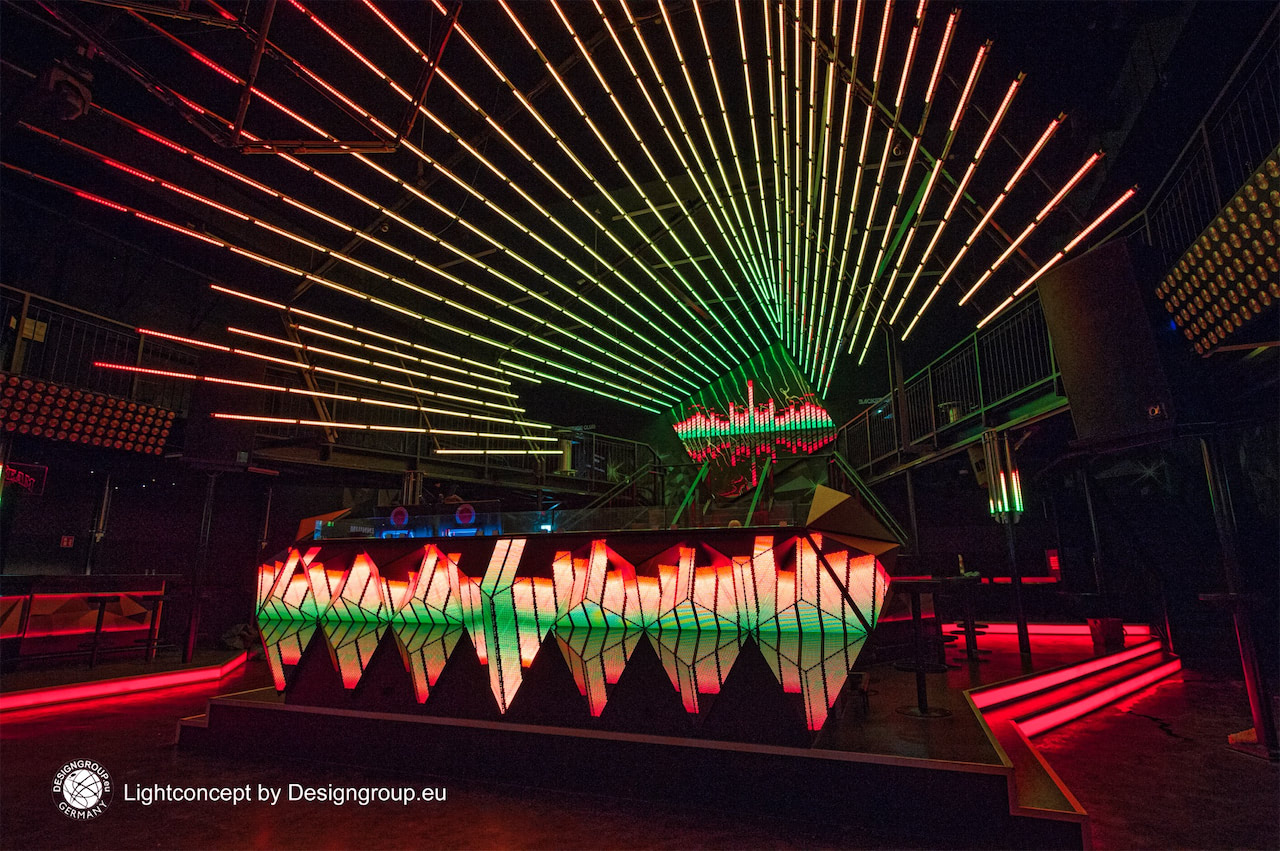 The goal for this redesign was to struck a balance between interior design and lighting concept and let the light concept not fall behind. The final result is a spectacular display of what is possible with LED technology, brought together in a consistent concept with lots of interesting details.

Special focus lay on working with the available space and architectural structure of the place and thereby creating interesting effects in perspective and all three dimensions. Dubbed 'Explosion Stripes', this main lighting installation nearly creates an optical illusion. It itself is an extremely complex steel frame construction that spans over most of the available free space and creates the distinctive character of the main room. Over 900 meters of aluminum pipes form the base for this lighting setup on which over 700 meters of LED stripes are attached. A more delicate, custom-made steel construction was deliberately requested over regular trussing in order to leave it wide open, to allow guests to see the dance floor below, and thus to not block the view from the gallery.

Each stripe is built as tube with 32 individually controllable LED light points for pixel mapping, resulting in an amazing light installation with impressive light shows that achieve full effect with suitable effects and video clips that were created especially for this purpose. These support the spherical impression of the installation and each stream leads to the huge, sloping LED pixel wall with 4 m by 4 m in total size and P10 pixel pitch. In front of it, a towering multimedia DJ counter with 5 mm pixel pitch was placed with its length of 4.80 m and height of 1.60 m.

5 three-dimensional LED cubes (140 cm x 140 cm x 140 cm) are another highlight that fit well in the overall design. 16 6x6 LED matrix moving heads, 30 LED COB spot blinders and 21 LED beam moving heads complement the lighting concept and were placed between the single frames. As a very special effect, 4 axial radiator fans were installed for show effect in fiberglas as they measure in fact 2 m in diameter.

All in all, the whole lighting system is controlled by multiple MADRIX control systems with no less than 5 MADRIX KEY dvi, 1 MADRIX KEY professional, 1 MADRIX KEY ultimate as well as several MADRIX LUNA hardware controllers.

The main challenge of this project certainly was the installation of the steel construction. It had to be fitted properly and mounted in the correct way and fixed to the balustrade of the gallery. Working in large heights and ensuring the workers' safety was no less challenging. On top, visitors on the gallery had to be prevented from touching the equipment to ensure safety of both, the visitors and the technology. This required a lot of careful planning and many angles and positions were tested for the steel frame prior to installation. Everyone is extremely happy with the final result to due the optical illusion that could be achieved when looking right up to the LED wall. The impression of the room is that it seems to be longer than it really is.

Likewise, we redesigned two secondary areas, the entrance hall as well as the backstage club. Highlight for the entrance is the 'Running Points' installation: 130 m of LED stripes mounted to the ceiling in parallel rows and controlled by one MADRIX PLEXUS in stand-alone mode. Highlight of the backstage area is the 'Rainbow' installation: a flexible construction around the main column of the dance floor which is equipped with 50 m of LED stripes as well as multiple LED design objects along the ceiling. 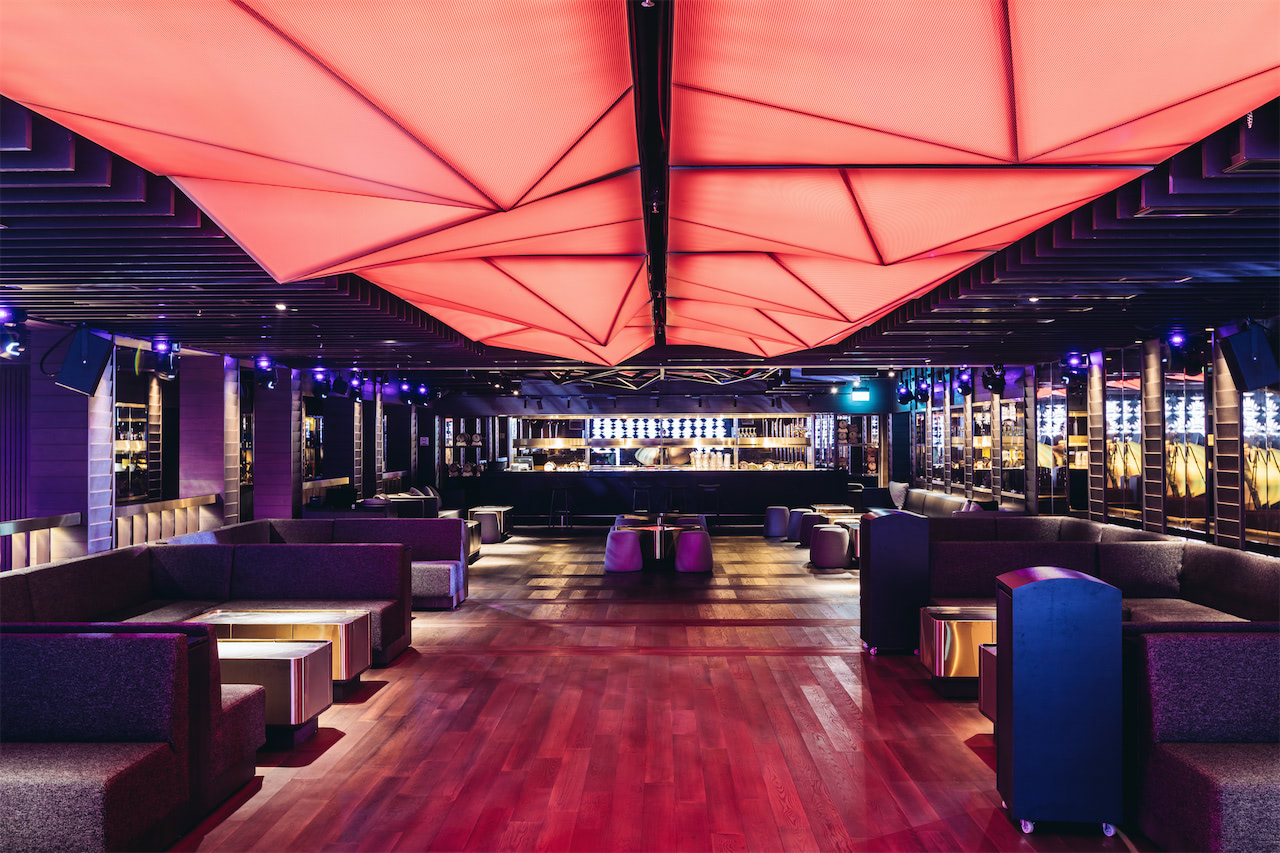 It simply is the answer to the club industry: Because of the premium look that does not compromise audio quality, Funktion-One Evo 6 was chosen for this exquisite venue.

This elegant room includes four distinct zones as well as a dance floor. The goal was then to be able to create different and finely varied experiences for up to 540 guests throughout the night.

We as LEDSCONTROL therefore wanted to integrate a lighting solution into the lounge-like atmosphere that was discreet when required but at the same time could be very dynamic when needed. We opted for a matrix made out of Martin LED pixels (VC-Dot as well as VC-Strip) with a geometric 3D diffuser which looks like an 'inverted mountain'; followed by indirect light to the ceiling with the same 3D geometric shape but without the 'skin' acting as diffuser.

In order to create other atmospheres as well, we added an arrangement of Martin MH8 moving lights. "These fixtures are small but powerful enough for the kind of vibe that we wanted to achieve in this VIP Room from Zouk Singapore", explains managing director and lead designer Rebeca Sánchez Pastor.

Additionally, there is an LED screen behind the oval DJ booth with curated content to complete the necessary media elements of this modern and luxurious space.

Creative, volumetric objects can be difficult to illuminate well, because of the different shadows that can appear. But in this case, the position of the pixels was strategically and deliberately placed by us in order to avoid any unwanted shades. This results not only in well-lit areas throughout the venue but also creates extremely interesting lighting elements.

The light evolves as do the people over the course of the night. We liked the idea to 'peel' this inverted mountain and show the same structural element in different ways by diffusing and reflecting the light. The lighting control system includes 2x MADRIX LUNA 16 as well as 1x MADRIX KEY professional. The MADRIX software helped us to create different moods and content getting the most out of the fixtures, installation, and entire system. 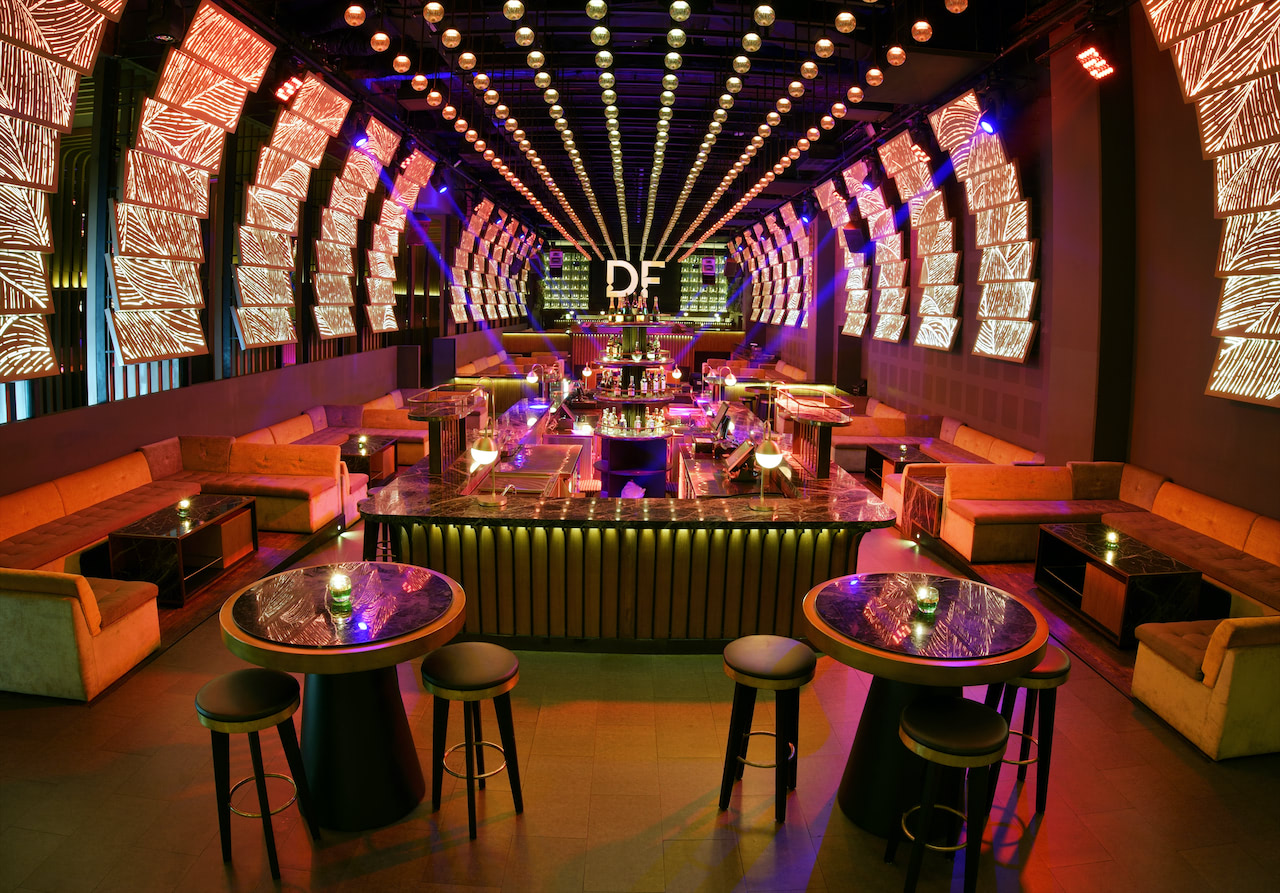 Dragonfly was voted Best Nightlife Venue in the MONDO-DR Awards 2017.

Dragonfly was voted Global Winner in the MONDO-DR Awards 2017.

Dragonfly has just reopened after its second renovation and it is one of the most creative LED installations we've seen in 2017.

Dragonfly owned by Ismaya group is a cosy, elegant space that has been meticulously designed. ‎LEDSCONTROL designed and installed the lighting and kinetic system. Everything is controlled using the MADRIX software and hardware.